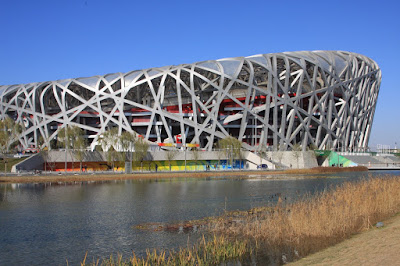 This is the "Birds Nest" and the centre piece of the Beijing Olympics last summer. Its still a huge draw for millions of tourists from all over China. 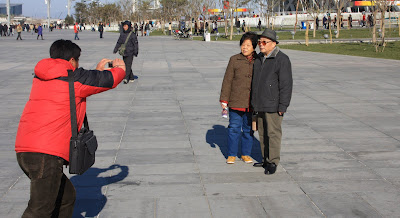 Capable of holding over 100,000 people the stadium is just one part of sprawling complex complete with banks of portable toilets. Not sure why I was moved to snap a picture of these luxury loos, but the sheer scale of their deployment ( this is only one of three banks of them that I saw), impressed me I guess. 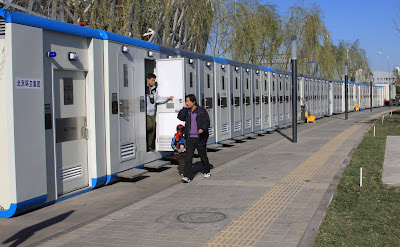 As can be expected the place was crawling with security but for the most part they didn't really seem interested. 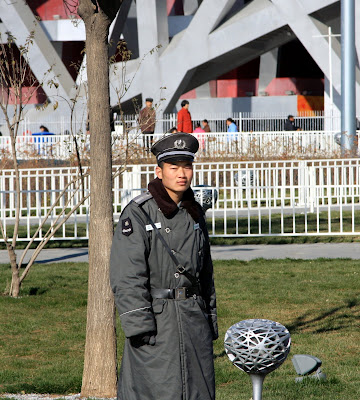 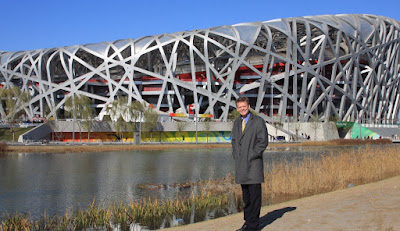 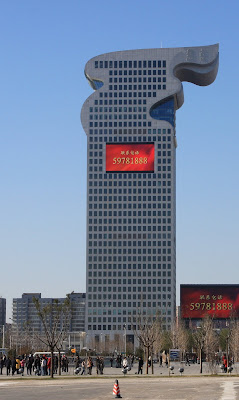 There's a couple of remarkable things about these photographs. The buildings are impressive sure but the blueness of the sky is a unique sight in Beijing. The night before there were strong cold winds blowing the smog (temporarily at least) away.
The "water cube" looked even more impressive in person than it did on TV. 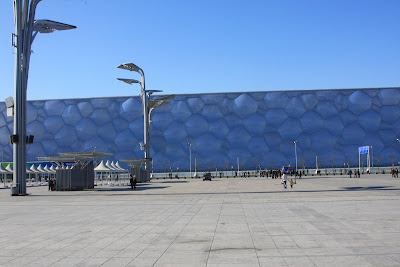 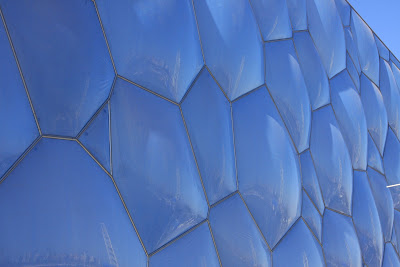 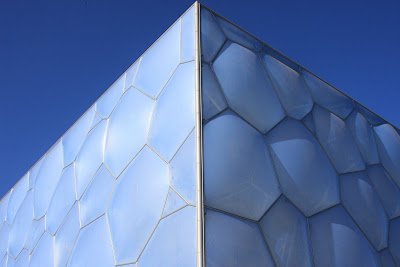 Cool building.
I've never seen the sky so blue in Beijing.
The government still has a license plate restriction on the roads and the congestion on the roads is unrecognizable.
Free flowing traffic for the most part, though being able to shift from lane to lane at will has just confirmed what I already suspected: Beijing is populated by insane, dangerous homicidal drivers . 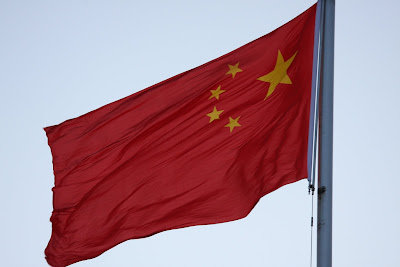 When I arrived in Beijing I had an hour to kill and made the 10 minute walk to Tiananem Square to watch the daily lowering of the flag ceremony.
It was freezing. 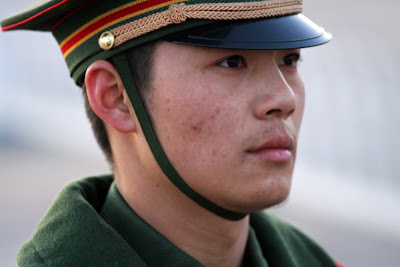 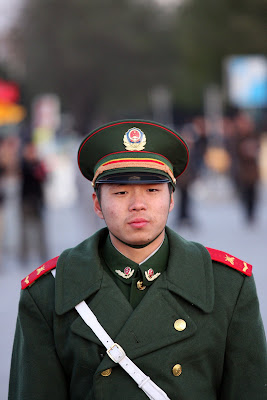 Goosestepping Chinese soldiers moving in perfect unison.
Quite a sight. 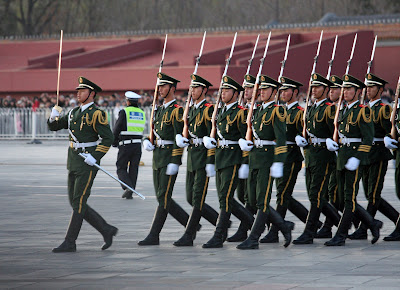 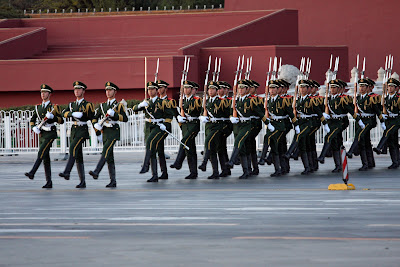 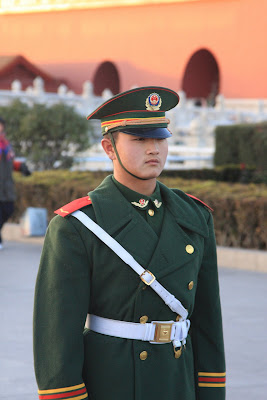 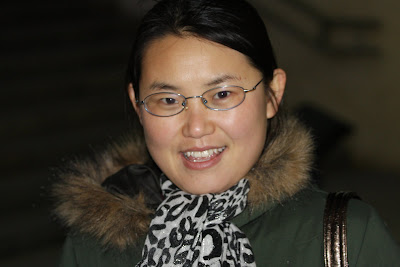 I call the girl above the "tea scammer".
Westerners walking around are constantly approached by "students" pretending they want to practice their English. They can be a persistent annoyance and usually they want to get you to go to some "gallery" of their "student exhibition". The girl above didn't mention any gallery she just doggedly followed me around as I took pictures of the flag ceremony and kept up her humble student pretense beautifully.
It was cold and she suggested going for a cup of tea and against my better judgement I agreed.
It was a scam.
The long and short of it was after two cups of tea I was presented with a bill of 1,800 RMB (about $200).
I just laughed and said no.
Call the police...go ahead.
They were dumbfounded.
The waitress left and returned with a bill for 900 RMB
I dropped 100 RMB on the table and left.
These people pray on older couples and well meaning tourists who don't want to make trouble.
Annoying and widespread.
Have a look at what this guy did to get his own back here 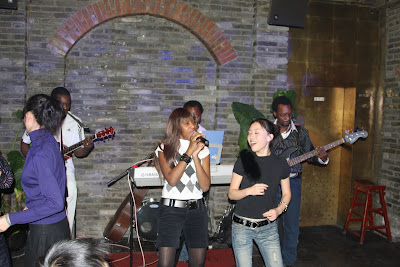 After a dinner last night ( Yak's milk, Yak meat and Tibetan beer) with my China team, 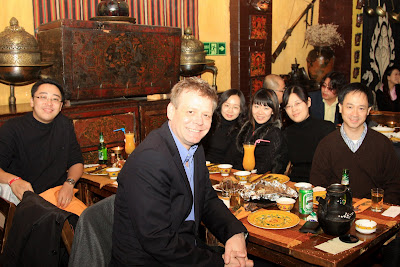 my colleagues and I went walking around a newly developed area of the city and came upon this astonishing sight of an African band playing Bob Marley covers whilst the monied of Beijing gyrated and bounced along to the music.
The area ( sorry I've completely forgotten where it was) was shiny and new though crawling with scammers, whores and pimps clutching your elbow as you peered into a long line of bars. Cold as it was I can only imagine their numbers would be tenfold in the summer.
At the entrance to the street there was a crowd of people ball room dancing and playing hacky-sack.
Beijing is nothing if not a collection of surreal interconnected scenes. 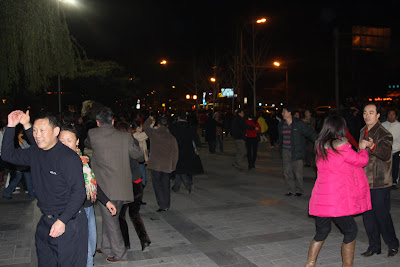 Finally I have to mention the pool at the hotel. It's a little piece of Vegas transported to the basement level of the Grand Hyatt.
Fun. 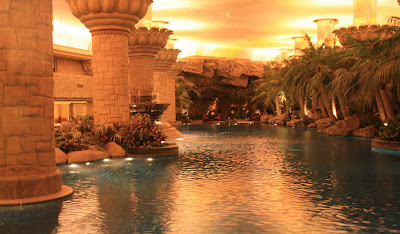 That's if for today. I'm back in HK and hitting the sack early.
Its been a long week. 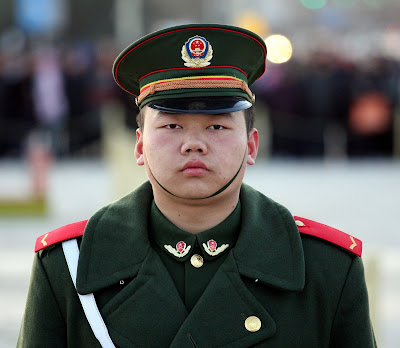 Have a great weekend.
T 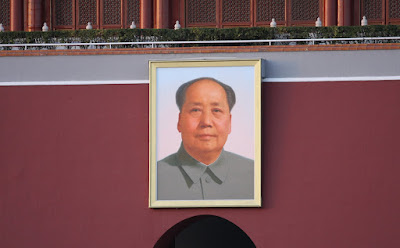 Be warned, my mother (a.k.a. Attilla-the-mum) lands in HK tomorrow.

The eagle is on the wing, half way to her Doha stop off. I dread to think what manner of HK tat I will be getting for Christmas. My bah humbug has started early this year...

What are you up to for Christmas?

The eagle has landed and nests in Causeway Bay...

hackey-sack is a sort of keepy-up game with a leather sack. They satnd in a gcircle and kick it high in the air to each other.

Do not think for one minute we will have that many toilets ... couple of porter loo's and one toilet roll :) if it is like concerts LOL , for our olimpics :) have a special time with Jess xx penny

Clearly my mother (aged 75) has no idea about time difference, she called here at 6.20am to advise that she had lost her boyfriend (aged, 80; not sure if she deliberately gave him the slip) and that she was on a HK ferry.

Update from the errant parent today: the boyfriend got on a different HK ferry, fell over whilst on board and now has a black eye and lacerations.

They are back in Blighty so it is safe to return to Honkers.

Fought like two cats in a sack, it seems.