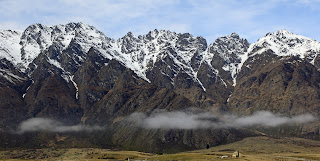 The above is the view from the club house at "Jack's Point" just outside Queenstown.
Everywhere you look is a postcard view which makes up for all of the lost balls, errant shots and "4 putts".
It seems KIWIs spend their waking hours engaging in violent dangerous sports.
If they're not jumping off bridges, racing jet boats on freezing lakes, they're jumping out of planes.
While we played yesterday there was a conveyor belt of parachutes disgorged by a small plane which took off and landed like clockwork from a field airstrip by the golf course.
He came in low over the 2nd hole fairway. So low in fact that there was the temptation to try and hit him off the tee. 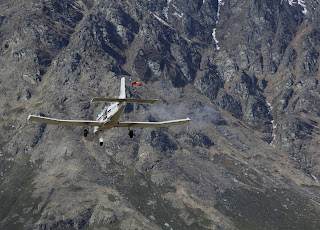 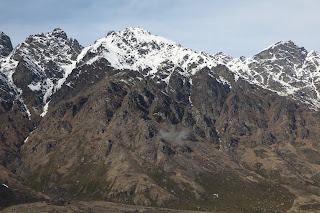 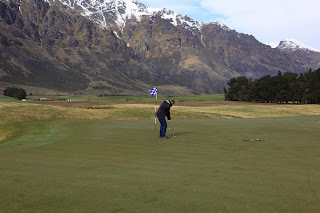 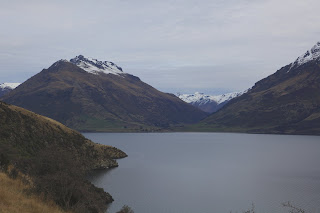 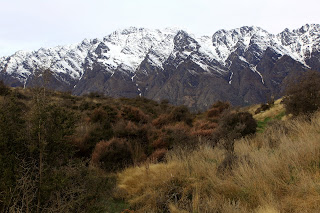 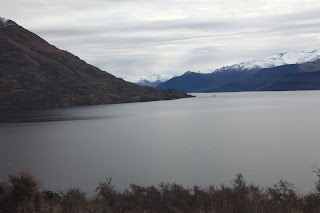 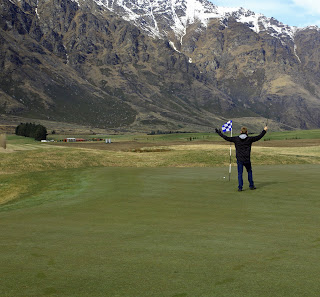 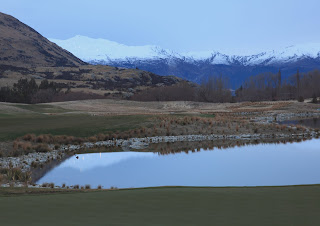 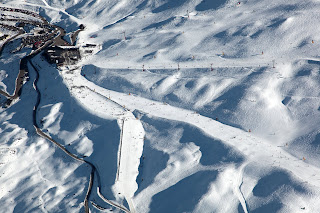 Seeing Queenstown by helicopter is a pretty great way to take in everything if you don't have a lot of time. It costs about $170 NZ$ a person ( minimum 2 people) and is a bargain. 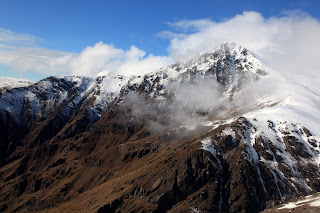 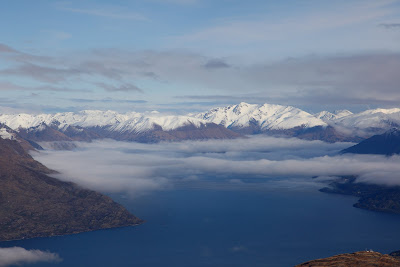 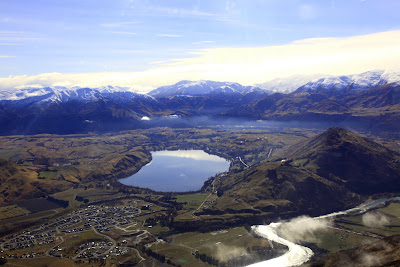 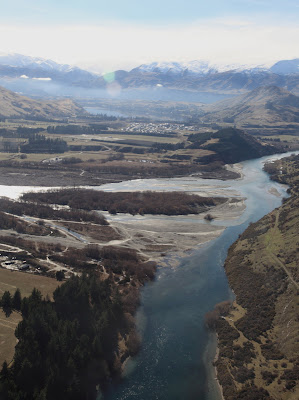 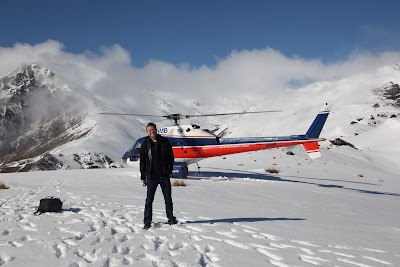 There comes a time in every helicopter ride ( I've been on three including this one) when the pilot decides to test the mettle of his passengers with a screaming "tilt on your side" turn.
Everyone goes "ARRRRGGGGHHHH!"
Kind of like the picture below.
Check out the horizon. 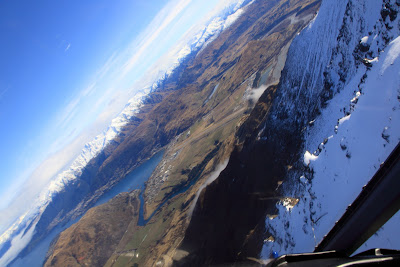 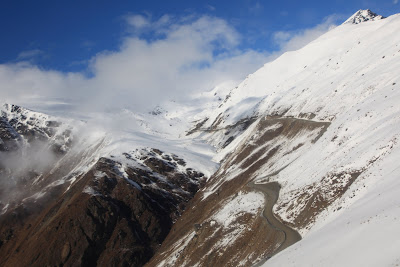 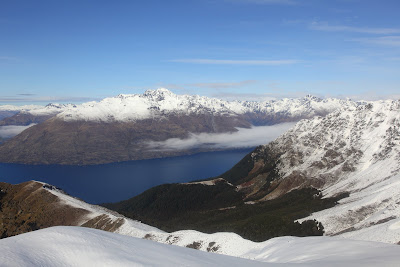 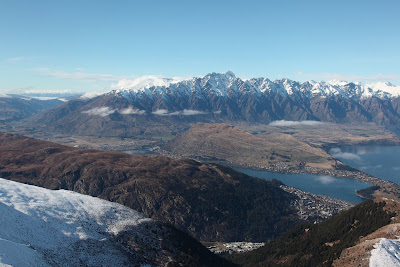 I'm not really sure how to define Queenstown.
It's considered the jewel in the South Island's tourism crown and is as famous for summer sports as the great skiing I saw on display.
An American colleague ( who lives in OZ) was there a month ago and said he had an awesome 3 days snowboarding.
The town of 10,000 feels very North American. That may be because there are over 2,000 transient workers many of whom seem to hail from the US Canada and Europe.
A cab driver claimed that there are over 700 Brazilians in town though the place is so small I'd like to know where they were all hiding.
Someone told me that it reminds them of Aspen (vibe wise), but even though I've never been to Colorado or Aspen, I think in my bones its different.
Aspen is a jet set, expensive place.
Queenstown feels affluent, but is inexpensive and doesn't project exclusivity.
Kiwis are a little nuts, but they're easy going at the same time.
(Queenstown is where Bungee jumping was invented. How in the hell did that get from concept to practice?)
So all in one?
Queenstown is a cool laid back young(ish) place where the developers have been kept on a tight leash and its isolated geographic location guarantees that the lure of really big money won't corrupt a well meaning city council.
Ski in the morning.
Play golf in the afternoon.
If that bores you go skydiving, jet boating or bungee jumping.
All of it wrapped up in an inexpensive, easy going place where you can drink the tap water and speak the language.
If none of that works.......
I can't help you so stay at home.
My only complaint was that it seemed impossible to get a coffee in under 30 minutes in a restaurant.
There was a Starbucks, but I resisted that evil temptation.
Stay well everyone. 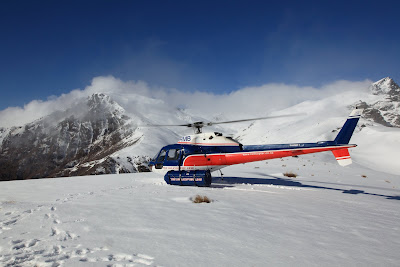 Coffee? Thought you had forsworn the evil bean.
:)
TR-HW

"An American colleague ( who lives in OZ)" ----- you forgot to say good looking! hope you are well and enjoying your time in Milan.
KGS

Kev....you want me to call ya good looking? I think you might start wonderingabout me then!
It has been said you ARE a handsome devil though