Dubai, Doha and sick as a dog 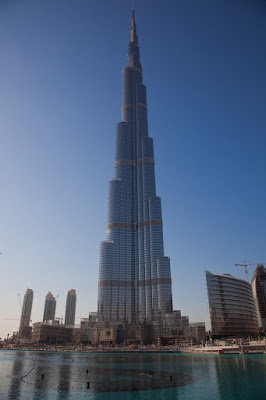 The Burj Dubai is finally finished (the structure at least). I've been taking pictures of its progress skywards over the past 3 years and its nice to see that despite the economic slow down the building's construction has survived the Emirate's staggering $80 Billion debt (there are only 1.2 million natives).
Regardless of the white elephant/monument to vanity/ derision which is sure to follow its final completion, I think its still an achievement in engineering.
Its not bad on the eyes either.
Sprawling around its base is the newly opened " Dubai Mall".
The biggest shopping mall in the world ( measured by total area), it covers 12 million square ft of shopping nirvana.
Featured attractions include: the world's largest Gold Souk with 220 retailers; the 850,000 sq ft (79,000 m2) Fashion Catwalk atrium; Fashion Island (Avenue), with 70 stores dedicated to haute couture; the Middle East's first Galeries Lafayette department store; Oasis Fountain Waterfall; and WaterFront Atrium. Other attractions include the region's first SEGA indoor theme park, SEGA Republic covering 76,000 sq ft (7,100 m2); KidZania, a 80,000 sq ft (7,400 m2) children's 'edu-tainment' centre; a 22-screen Cineplex, the largest in Dubai; and The Grove, an indoor-outdoor streetscape with fully retractable roof. It also features over 160 food and beverage options, 220 gold & jewellery outlets; a supermarket and an organic food mart. Among the shops is British toy store Hamley's, which opened a 32,000-square foot (3,000 m²) store that includes a replica of London's Regent Street, with the franchise owned by Retail Arabia.
Many shops, however, will remain shuttered for a long while to come. Bloomingdale's might open by 2010. It also has a 250-room luxury hotel, 22 cinema screens plus 120 restaurants and cafes. The Mall has over 14,000 parking spaces across 3 car parks, with valet services and a car locator ticketing system
So says Wiki
To me it appears much like any other mall with all the usual stores (albeit A LOT of them) except it has an aquarium and a ton of other non shopping stuff.
Oh and the tallest building in the world outside its door. 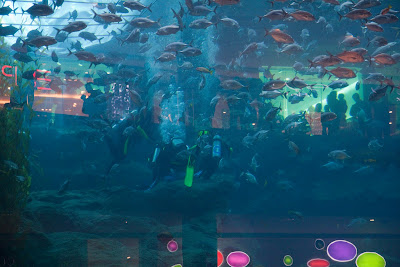 I arrived in Dubai at 5 am Tuesday morning. After checking into my hotel and grabbing a shower it was back to the airport and I hopped on a flight to Qatar. 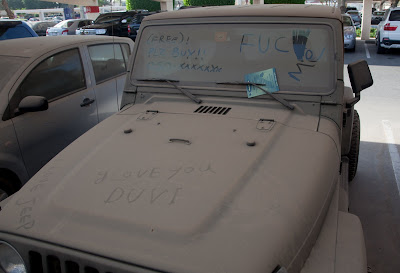 Despite the extravagant monuments to capitalism, the airport hints that all is not going according to script .

The parking lot is littered with abandoned cars.

Expats who've lost their jobs and run up their credit cards have simply "gone home" to their bankrupt home countries. 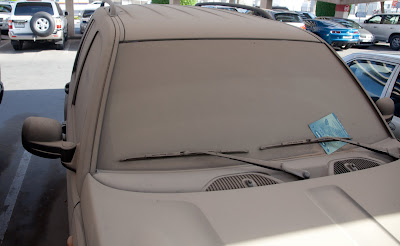 These are the only pictures I've taken of Dubai and I only got a chance to do so because I made a foraging trip to the pharmacy to pick up bottles of water and Imodium.
I've been sick as a dog and had my first food tonight since Tuesday.
Food poisoning.
The tsunami hit around 2 am Wednesday morning.
I sprinted from bed to toilet all night and spent Wednesday in bed fitfully dozing, vaguely worried that dehydration would cause me some sort of permanent damage.
I couldn't hold down a tea spoon of water.
Forget about thinking I was dying.
I wanted to die.
The strangest part was the procession of bizarre dreams.
Over 22 hours of fitful sleep I came to understand these were simply cues from my stomach it was time to wake up and feed the porcelain god...
Happily I seem to be on the mend.
Spare a thought for me my American chums:
As you tuck into your Turkey, I've been fearfully nibbling at plain yogurt and dry toast.
The rest of the pictures are from my quick dash to Doha.
It feels like a long time ago since I took them , blissfully unaware of the waterfall/volcano brewing in my guts. 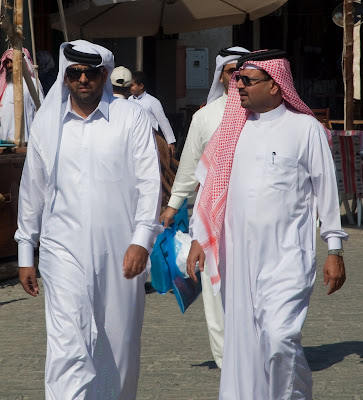 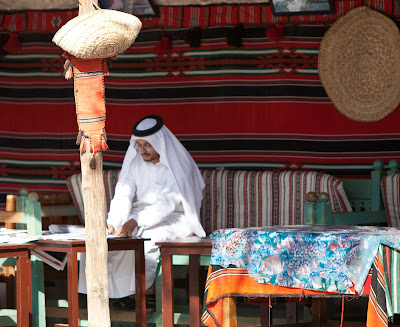 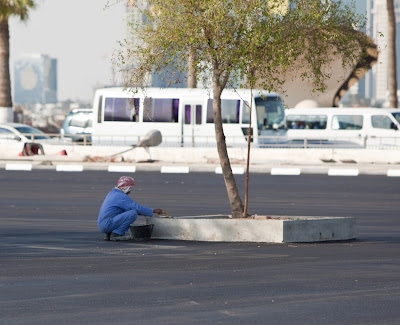 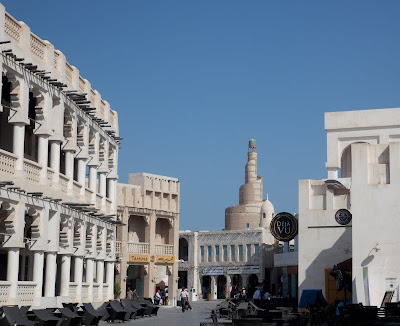 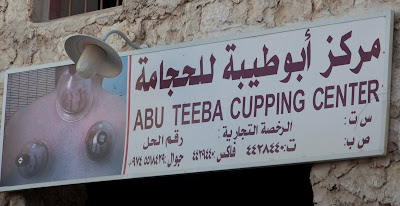 Yikes!
No matter how sick I felt, I would pass on that. 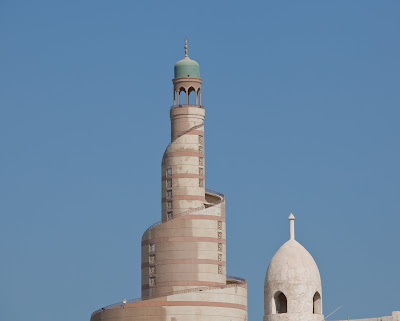 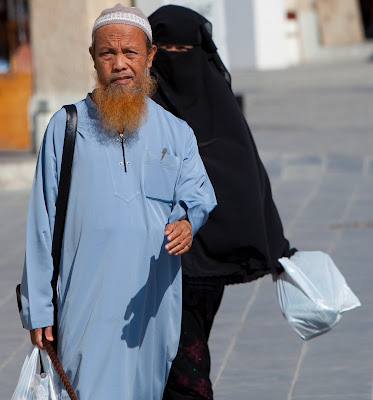 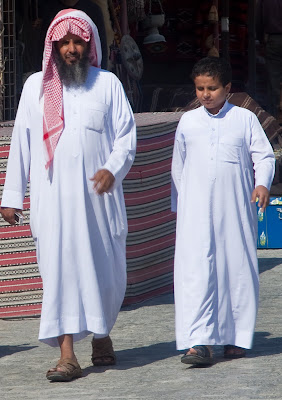 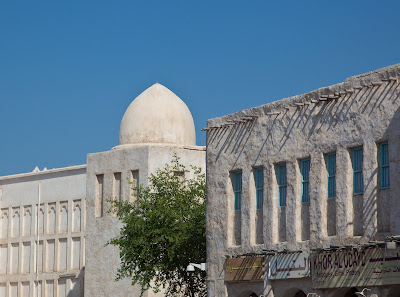 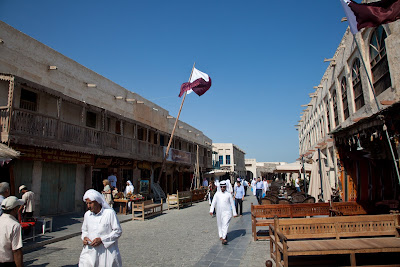 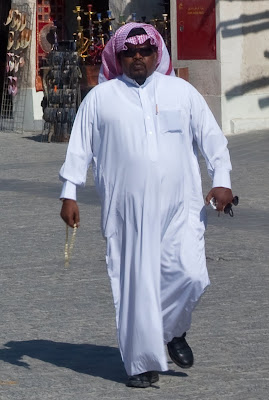 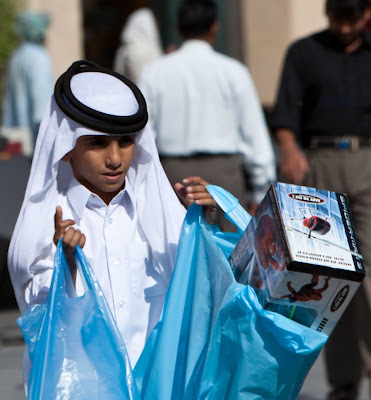 That's it for today.
I fly to the UK at 2am Saturday morning and hopefully see my kid the same afternoon. 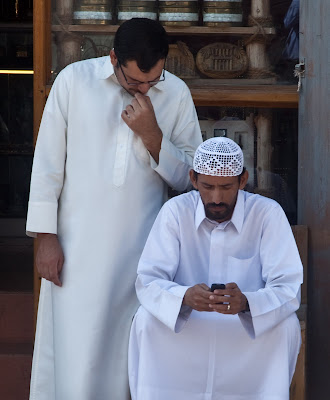 Never quite sure about Imodium, unless you absolutely have to take it (in transit etc.), if your body wants it out... there's probably a good reason. I'm assured that iv rehydration works wonders.

Hope travel goes to plan at the weekend (and you're not too knackered to enjoy it).

Wow, I'm glad to see that you're feeling better! See you next week in London? Enjoy the weekend with your kid :-)
I'll be shopping around in London from Sunday afternoon ...

I am glad to see you are feeling better, have a safe trip to London. stay healthy and enjoy the time with Jessica.
See you soon...

i didn't know i needed to download omg by mark ronson til i heard it on your blog :-) thanks