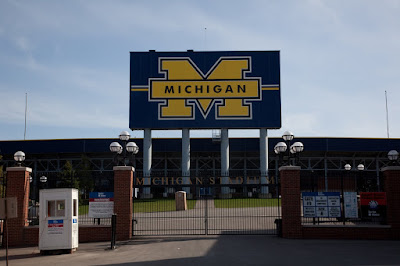 Welcome to Ann Arbor, Michigan, home of the "BIG HOUSE".
On November 22nd 2003, Michigan played Ohio State and the game set the record for attendance of a college sports event: 112,118.
The official capacity is listed as 106,201, but when staff, bands and media are added it often tops 111,000.
Ann Arbor has a population of 114,000.
Needless to say the local community braces itself for the influx of traffic (and business) on "Football Saturdays".
Only in America.
This all seems slightly mad to me.
I arrived in the US last Tuesday after spending almost 4 hours getting my L-1 Visa processed at the border in Buffalo. I was amazed at the arbitrary nature that folks seemed to be pulled in for "further enquiries". There were quite a few Borderland Security guys standing around drinking coffee and not a lot of "processing" going on.
I sat for a couple of hours watching people come and go and shooting bull with a guy on his way to a Sabres game, but for no reason he could figure was stopped.
Game time came and went and still he sat there.
After NAFTA Canadians have the "privilege" of getting their work VISAs processed at the border rather than beforehand at a consulate. The waiting room was full of people with shopping bags stuffed with framed degrees.
It all felt very odd.
Everyone waited.....and waited....and waited.
You get called up, the guy asks you a couple of questions then you're told to sit back down again and "think about your answers".
The process got old fast.
The surreal moment of the day came when the guy asked me who "Debbie Mo and Alcome Chu" were. I swear if I hadn't been so fed up I would have burst out laughing. He was obviously reading names off our Asia-Pac website and had picked the only ones he could pronounce.
America, your borders are safe.
After this waste of time I was back on the road and over the next 7 hours drove through 4 States: NY, Pennsylvania, Ohio and Michigan.
They all looked pretty much the same to me.
There was one billboard which caught my eye: "Fireworks, Liquor, Stun Guns and Tasers, Next Exit". 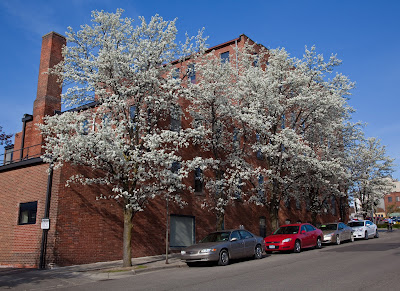 Ann Arbor has been described to me as a "Liberal Bastion in a resolutely redneck State".

It's too early to tell.

So far it strikes me as a pretty place and feels much what I imagined a small town in the Midwest would be like. I think it punches above its weight given the money the University pulls in. The facilities, big stores and variety of restaurants are probably not representative of towns of comparable size in the region. Detroit is the nearest big city but I don't hold out a lot of hope for it. My first impression has been of deafening silence.

After HK and Asia it feels very quiet here.
People don't lock their doors.
They nod to you as they walk their dogs by your front door.
You're pounced on with "Hello!! How are you doing today???" when you walk into a store.
Any store.

No service with a sneer here.
That's kind of nice. 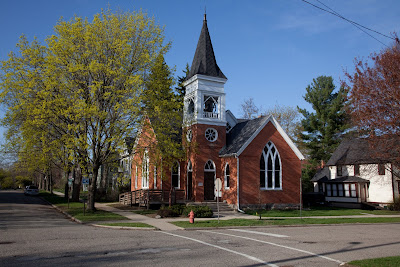 Post card church on my street.
The only negative (outside of the silence when the marching band isn't practicing) is that the place feels very white bread. This is not the most diverse place I've ever been.
I'm committed to give it a chance and approach things with an open mind.
Stay well everyone.
T
Posted by Terry at 11:57 pm

Give Detroit a chance. At first glance it is as though a neutron bomb or three went off but there are signs of life returning to what was a great city a long time ago.
And I would love to see pictures. In the day time only of course..

Is this the genesis of Terry's stay put and thoughts?

Hope by now you have sourced something recognisable as food, or at least potentially edible.