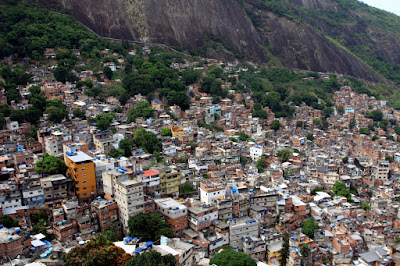 Just one km from the Beach and some of the most expensive real estate in Brazil, the Rocinha Favela is home to an estimated 100,000 people. The word "Favela" comes from the name of a fast growing plant (weed really) and there's some debate over whether the name is a reflection of the indigenous fauna or the speed with which these communities expand.
A striking characteristic of Rocinha in particular and Favelas in general is the geographic aspect they occupy in Rio.
In most coastal cities I've been to the higher you go the more expensive the real estate. In Hong Kong for instance, as you move up the Peak the prices go into orbit. The opposite is the case in Rio as it's the poorest neighbourhoods which have the million $ views. 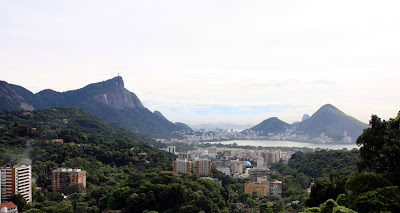 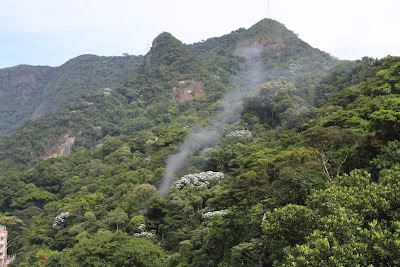 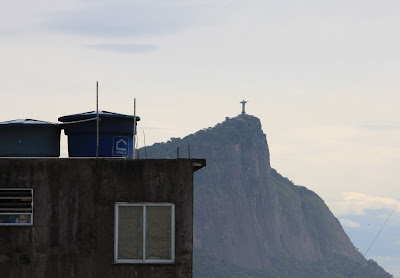 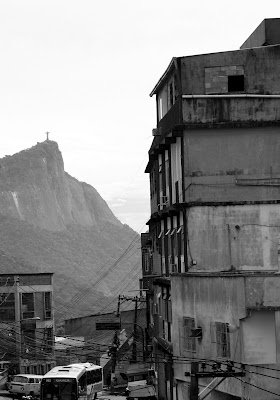 There are more sobering sights however. 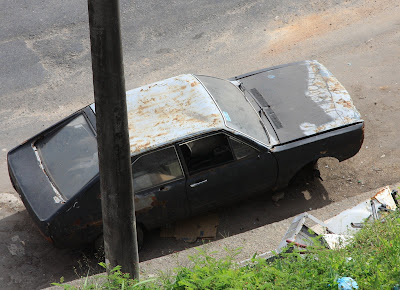 The architecture in Rocinha defines its permanence. Two and three story structures of brick and mortar give it the feeling of urban slum rather than shanty town. The houses have plumbing and pirated electricity, but little in the way of civic services. There's limited garbage collection and the government's presence is non existent. I was impressed with accounts of the speed of construction and the do it yourself plumbing as a contrast ( in my experience anyway) to the glacial pace of "official" Brazil. 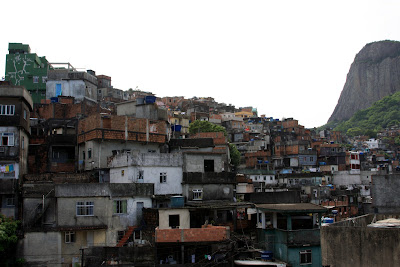 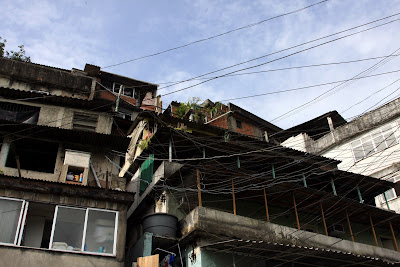 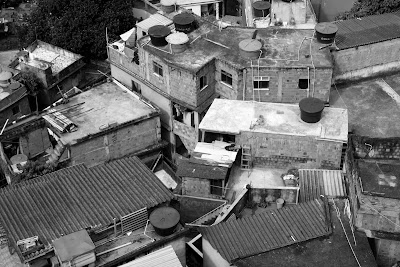 Ever since the movie "City of God" the vision most people in North America and Europe have of Favelas is of drugs, violence and lawlessness. I saw a community of people though clearly poor, who were full of energy, smiles and life. Little touches here and there were soft reminders of the humanity of the place. 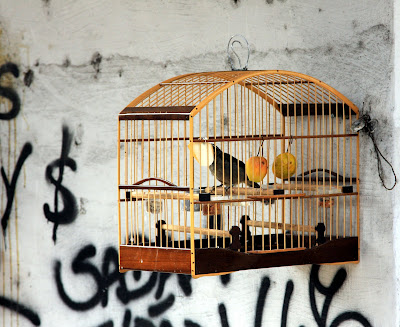 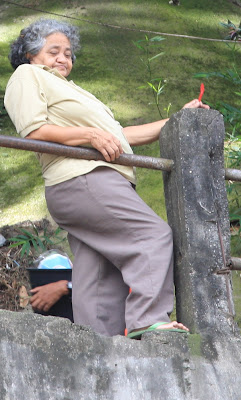 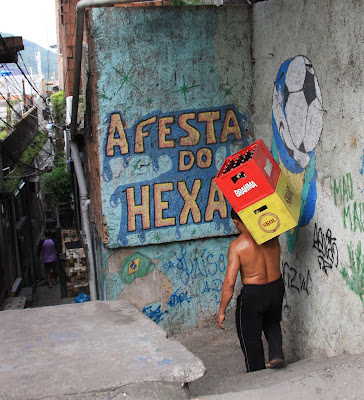 Favelas are the home of the poor underclass in Rio. Domestic workers, street cleaners, construction workers and aluminum scavengers all live here. The people are poor, but I've been to much poorer places in my travels.
The point I'm trying to make is that the Favelas are not a seething mass of criminals living in tarp and scavenged wood huts though many of the middle class I've met in Rio consider them the main source of the violent and petty crime. The muggings, robberies, burglaries and assaults in Copacabana and other tonier areas are probably traceable to some Favela inhabitants, but I think its the inability of the government to exert any presence which make them a haven for criminals which would exist in any population rich or poor.
The place I visited with some exceptions, was poor but full of normal people trying to get on with their life. Many gave me a thumbs up gesture accompanied by a smile as I mindlessly snapped away with my camera.
In my book at least, this constitutes a simple gesture of goodwill.
I asked my guide, a charming woman named Lucia, whether she ever felt bad about bringing a string of gawking tourists into the area.
However respectful a tourist's behaviour, in my mind there's a "visiting the zoo" vibe to such excursions. She seemed troubled by my question but came back later to say that on balance the tours served to educate people that the majority of inhabitants were hardworking, normal people.
All is not sweetness and light however.
The Favelas are controlled by drug dealers.
There's no debate about this.
The police consider the communities no go areas, and the inhabitants look at the authorities as largely corrupt and no source of safety.
There is a measure of security within the feudal rules of Narco control and for the most part this is accepted by the everyday people.
I can't help but suspect there's a sort of Stockholm syndrome in play. I can't imagine such an arrangement in Europe or the US and though I'm sure some will comment that it exists, no way does it happen on this sort of scale.
The drug dealers don't make the majority of their money from people living within the Favelas. The revelers in the discos and clubs in "rich" Rio is the source of most of the cash.
The middle class journey up the hill to buy their poison. If they stopped maybe the balance of power would shift.
There are two rules when you take the tour.
No pictures of children.
No pictures when you see gas ( propane) cylinders.
Drug dealers control the distribution of cooking fuel and presumably use these street stalls (always located on corners affording wide views) as centers of distribution.
I was itching to snap off a few pictures of the brooding unsmiling young men gathered at these places but rules are rules.
Besides, taking pictures of drug dealers in Favelas would undeniably be very bad for my health.
Favelas are ideal for the gangsters because the claustrophobic nature of the winding alleys and confusing narrow walkways make it almost impossible for the police to conduct raids. The guide told me that tours often encountered armed groups walking through these paths, but none were on view when I visited. 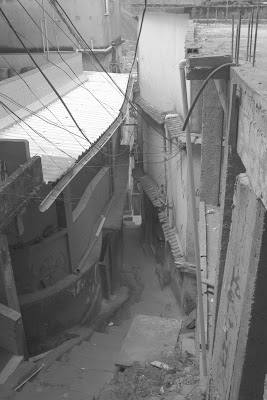 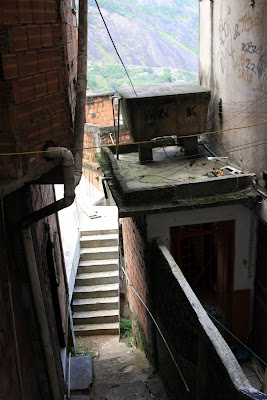 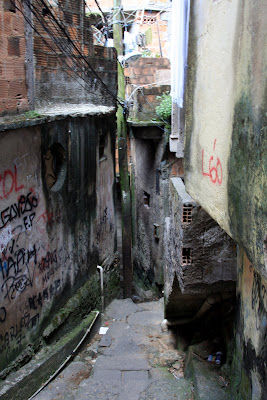 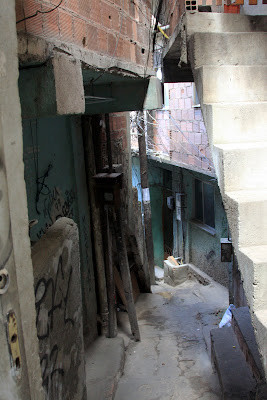 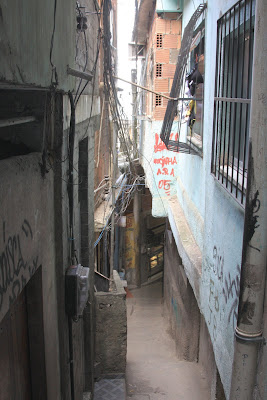 That's if for today.
There are no dramatic pictures or insights in this post, but I think the experience was interesting and gave me a further insight into this remarkable city. 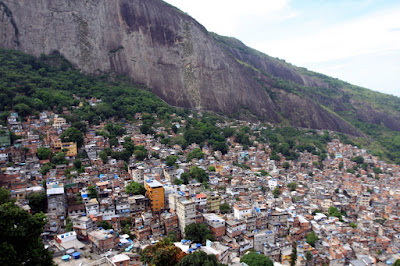 If you're visiting Rio and want details of Lucia, my guide ( she does all sorts of tours around Rio) shoot me an email and I will pass on the details on her card.
That's it for Rio as I leave for the UK tonight.
Stay well
T 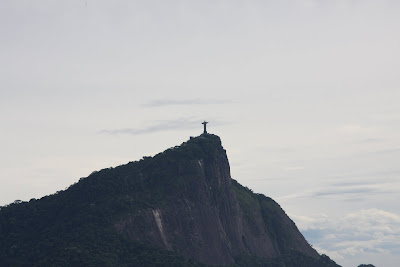