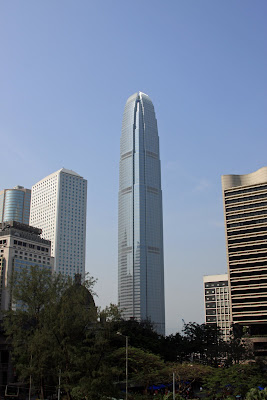 It was as nice a day as one could imagine and as I'd shaken off the effects of my ill considered Friday night wrestle with my sometime (false) friend Jameson, I headed into Central for a wander. 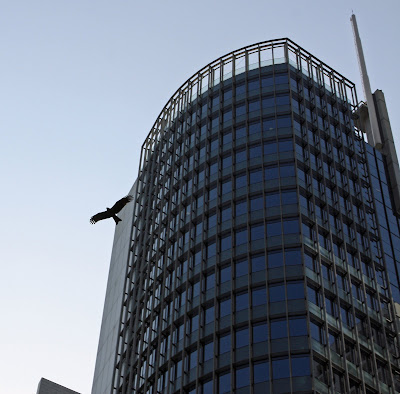 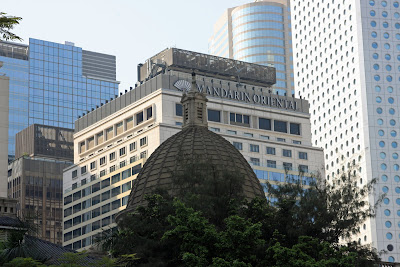 There was a protest of sorts (the HK Union of Students were bitching about something) but the police outnumbered the earnest young boys and girls so there wasn't much of interest to gawk at. 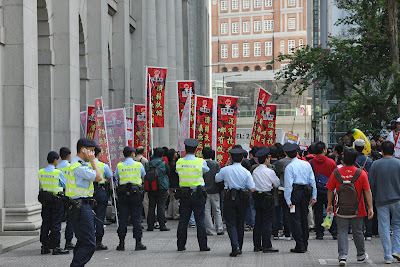 The real event which takes place every Sunday in Central (rain or shine) is the weekly gathering of Hong Kong's maid population.
There are roughly 140,000 Filipinos in Hong Kong and the overwhelming proportion of them make their living as maids and domestic helpers. Sunday is their day off and they gather in Central to socialise, dance, pray and picnic.
I'm always struck by the sheer volume of the chatter audible blocks before you arrive. It sounds to my ears anyway like a giant flock of geese.
Today there was a performance of sorts though it appeared to me more of a beauty product marketing exercise dressed up as a beauty/talent contest. 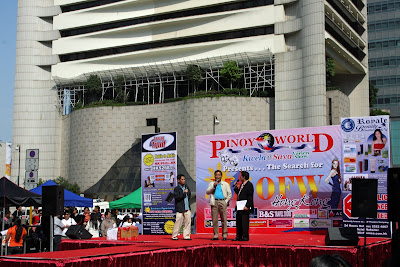 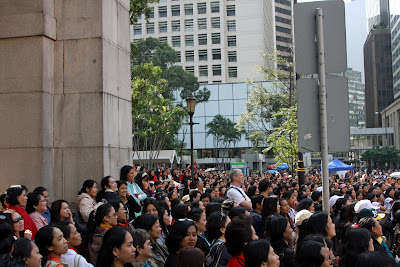 I've always been struck by the innocence of this weekly ritual. Birthdays are celebrated, home made food eaten and for a day at least homesickness is held at bay.
They have a pretty tough time of it I think. 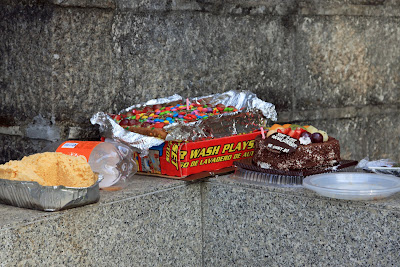 Hong Kong can be a strange place at times. 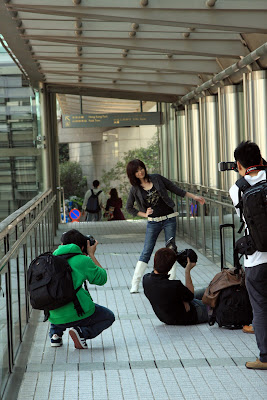 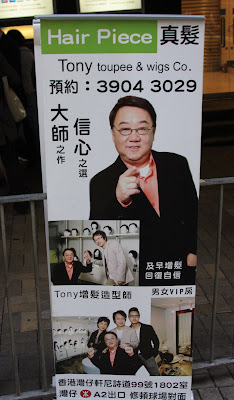 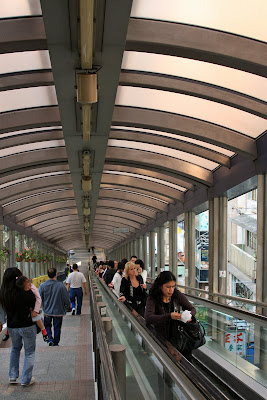 OK that's the obligatory shot of the escalator, longest outside version of its kind in the world, I take it to work every day, blah,blah, blah. 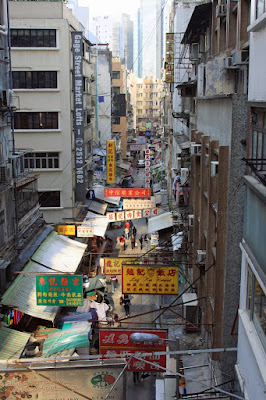 For as long as I can remember there's been someone sleeping on the sidewalk at one of the busiest corners in Central. 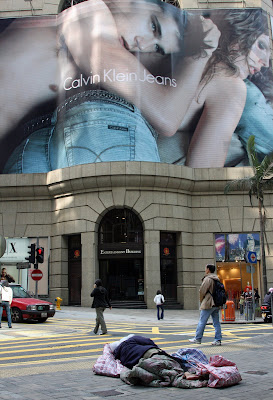 Money and poverty, cheek by jowl. By no means unique to this city, but jarring none the less. 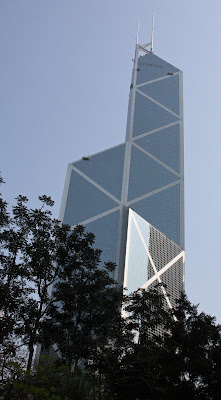 That's it for a meandering Sunday walk.
Stay well
T
Posted by Terry at 5:53 am

Think they have a very tough time of it. At the flop house where I stayed in HK, the Filipina maid had 3 children being brought up by relatives back home and a stinker of a husband. She slept in what I can only describe as a recessed shelving unit, about 6 feet wide, 2.5 feet deep, with a bed shelf, her worldly belongings on the shelves above and below, shielded from the "reception" by a curtain. She lived in the shelving unit. A step up from the guy who slept in the narrow hallway of the building.

Makes you think and count your blessings.

Who do these Filipino women work for? What is the racial make-up of the upper class in HK, I wonder- (USA is an open book.)

Hong Kong Chinese make up 95% of the monied class in Honkers. The maids would much rather work for an expat family as they are treated much better and not forced to sleep in a closet (maids room). The expat population is in rapid decline as the banks pull in their horns and wield the axe.
I've heard of maids being "hired out" by their Chinese employer to wash cars (he keeps the money of course). I've also heard of much much worse.
Most of thee women work 12 hour days, 6 days a week and send what little money they make taking care of other peoples kids, home to try and feed their own children.
Count your blessings everyone.

Not really sure what there is to expound on?

It's an ex US colony, system of government and many laws are based on those of the USA. Successive governments have been eye-wateringly corrupt, but propped up by the US, leading the Flips further into the ecomomic doldrums in which they languish.

Then again, we're all becalmed in the same boat at the moment.

Well I think people have over extended themselves in every country...just look at the creditcard debt in the UK for god's sake.
As for the US being the source of all evil and dominating the Phillipines, I hardly think you can lay the country's chief export (people) at the door of US foreign policy. Its been independent for some time now. Corruption is hardly the monopoly of countries foremerly under US control. Look at Eastern Europe.....Africa....Venezula....

Sigh. I didn't say the US was the source of all evil etc. etc., I'm sure the Phillipines is perfectly capable of making a hash of its economy alone. I'm just saying that US involvement there really hasn't ameliorated the situation and has kept various presidents there in power for longer then would otherwise have been the case.

& don't get me started on credit card debt: if you can't afford it, you certainly can't afford it six months down the line with interest. Fools and their money...

On that note this fool had better get back to earning some.

We Brits (along with the Belgians, French, & Dutch) can take responsibility for the precarious state of various bits of Africa.

What's the bet I'm on the receiving end of a barrage of abuse overnight?

TR-HW or Anonymous is somewhat correct. The US did bankroll former presidential regimes of the Philippines; i.e. Magsaysay, but mostly Marcos. The latter was primarily because the short despot threatened going red and was chatting with North Vietnam. Clark Air Base was the seat from which the US monitored Japan after the war and housed the military during the conflict with Vietnam. But then again, I'm probably got it all wrong.

Hey, billions of US $ for some 600 square kilometers of the archipelago. Let me see... my place is 100 square meters. How much do you think Barack will give me for it?

Considerably less than he would have given you this time last year.

Totally off topic, but the Bank of China (last shot) is supposed to have really lousy feng shui, if you believe in that sort of thing.